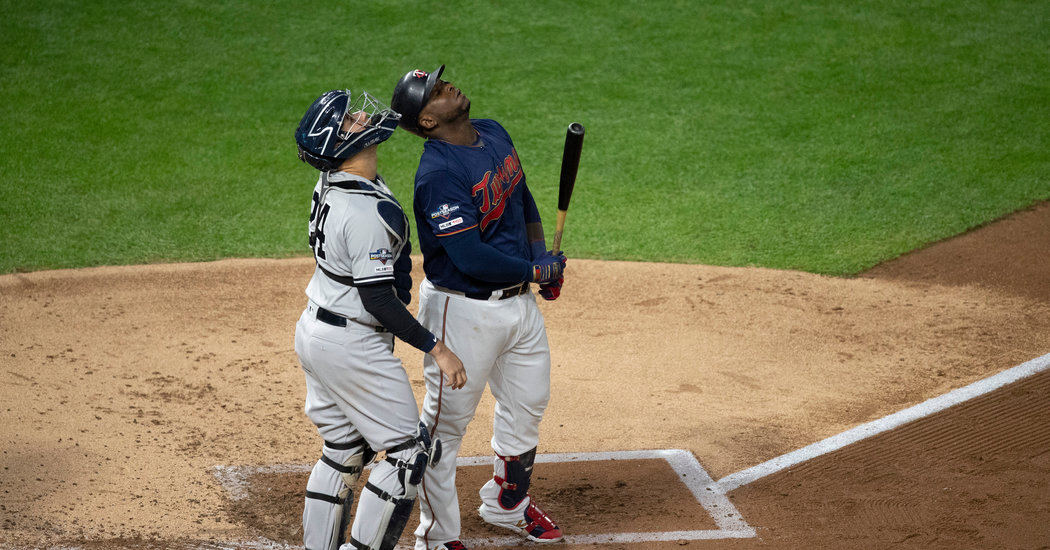 MINNEAPOLIS — There was a mellow quality to conversations with the Twins after their finale with the Yankees, a wistful pride at what they had accomplished before that eighteen-wheeler from New York City flattened them.

The Twins hopscotched from 59 wins four years ago to 78 last year to a near dominant 101 wins this year. In a season of a rabbit baseball, the Twins hit a silly number of home runs and come caterwauling out of the great north and took their division. Attendance jumped, and the season became a carnival.

Rocco Baldelli, the Twins’ young manager, slid into his seat Monday night, having come out on the wrong side of a 5-1 score in the deciding game. He shrugged. His team had just lost its 13th consecutive playoff game to the Yankees, a record of futility that extends to the early days of this century.

Look, the man conducted himself with aplomb, but we can take a hacksaw to his conditionals. There was no probably about it. The Yankees dispatched the Twins as a farmer puts down an old cow, clinically and with minimal fuss. The Yankees scored 18 runs in three games and pitched well; the Twins scored seven runs and threw raggedly.

The Yankees backed up bases and made elegant catches and took misplaced sliders from Twins pitchers and deposited those balls in far-flung corners of the stadium. Gleyber Torres, an ebullient 22-year-old all-purpose infielder, hit a home run and a double, and made a nifty sliding stop of a ball in right field, taking a balletic spin and tossed out the Twins runner at first base.

“They made it difficult,” Yankees Manager Aaron Boone said of the Twins. “They had traffic.”

It’s good manners to speak well of the departed, but most of that Twins traffic broke down on the metaphoric expressway. A few Twin players proved entertaining. Eddie Rosario, their left field slugger, saw a ball up in his eyes and took a cave man swing and knocked it off the center field wall.

Another player, Miguel Sano, came up later with a chance to tighten the game. Last season Sano weighed in at more than 300 pounds, a rotund mound at third base. He devoted this past winter to firming up and emerged a fearsome player. With a teammate on second base, Sano, who flexes and preens at the plate like a mobster in the dock, launched a BB to right field.

Aaron Judge patrolled out there, and on some teams that might be seen as an effort to hide a hulking slugger. Not with Judge. He glided backward and timed a leap, and at the fullness of his 6-foot-7 frame snared Sano’s ball. Not for the first time I found myself hoping this superb athlete can overcome the injuries that have caused him to miss more than 100 games the past two seasons.

He has it in him to put up a stunning statistical array, and with the Mets’ Pete Alonso on the other side of town, he could give the city the two best sluggers in the game.

Much of the Twins’ story is heartwarming, as young players find their strokes and confidence. That said, oddities abound, peculiarities that edge too close to chemistry for comfort. So Jorge Polanco, the Twins’ young shortstop, was suspended last season for taking a powerful steroid. He apologized and he insisted it was a mistake. He came back this season and hit more homers with a higher slugging average than in the past, and made the All-Star game. In track and field, athletes routinely are hit with suspensions of multiple years, and some competitors favor lifelong bans, as the effect of steroid use can confer long lasting benefits.

Maybe Polanco simply matured, which at age 25 is a perfectly reasonable explanation. It is also reasonable for the more skeptical minded to hike an eyebrow.

Another Twin, Nelson Cruz, is a soulful veteran leader, a 38 year old who slugged 41 homers in just 454 at bats. He also was implicated years ago in the Biogenesis doping scandal in Miami and suspended fifty games. Maybe that too is unfortunate history. There is however the eye-widening fact of his statistics. Cruz, who hit more than 20 home runs just twice during his twenties, has now averaged more than 40 home runs between the age of 33 and 38.

Back on the field, the game was, if not close, at least diverting. A cityscape twinkled in the October chill, and Twins fans wore proud baseball history on their backs, sporting countless red jerseys with the names of Twins greats: Rod Carew, Tony Oliva and the brutal slugger Harmon Killebrew.

Unfortunately, baseball is its own worst enemy even in its glory. Postseason games routinely stretch hour upon hour upon hour, made worse and worse by the vogue for summoning a steady march of faceless relievers. Aaron Boone burned through three in the fifth inning alone.

This season had the longest average game time in baseball history, reaching 3 hours, five minutes. Last night, the game passed that mark in the seventh inning. It was baseball’s version of Lunesta and was made worse by interminable network commercial breaks.

By the middle innings, pitchers had stopped tossing warm-ups and lounged on the mound while infielders took to jumping jacks to stay warmed up.

When the end came near midnight, many fans had long ago streamed through the exits, and the Yankees celebration, the usual waste of industrial strength Champagne, had a perfunctory quality.

“This was our absolute best effort,” Baldelli insisted before departing into the night. “Nothing got in the way of it.”

Nothing except that Yankee eighteen-wheeler.