Here’s what you need to know:

The Syrian Army entered the town of Tel Tamer in northeastern Syria, the state news media reported on Monday, soon after the government of President Bashar al-Assad forged an alliance with the Kurdish forces that control the region.

The return of government forces to northeastern Syria not only deals a blow to Kurdish-led forces who were supported by the United States, but also signals a major shift in Syria’s eight-year war.

The Syrian government had been almost entirely absent from the northeast since it withdrew or was chased out by armed rebels. The Syrian Democratic Forces, a Kurdish-led militia that worked with the United States to fight the Islamic State, soon became the region’s overarching political force.

Although the Syrian Kurds did not declare Mr. Assad’s government an enemy, Mr. Assad distrusted their efforts to establish self rule and vowed to retake all of Syria’s territory. But he had no way to do so, especially as American troops remained in the area.

President Trump’s decision last week to move those troops out of the way of a Turkish incursion gave Mr. Assad an opening, and his forces began to fill it on Monday.

In some towns, they were welcomed by locals who chanted nationalistic slogans and carried Mr. Assad’s photograph. In other areas, trucks drove large numbers of Syrian soldiers into the area to take up positions.

Tel Tamer is a strategic crossroads that connects northeastern Syria with the country’s northern hub, Aleppo, and is 20 miles from Ras al Ain, the center of the Turkish assault.

If Syrian government forces can reach the Turkish border to the north and the Iraqi border to the east, it would be a major breakthrough in Mr. Assad’s quest to re-establish his control over the whole country.

Syrian government forces also entered the town of Ain Issa on Monday, a day after it was briefly overrun by Turkish-led troops. Around 500 ISIS sympathizers took advantage of the mayhem and escaped detention, local officials said.

Syrian state television showed long lines of Syrian Army vehicles in Ain Issa on Monday, greeted by a group of cheering residents. “We’ve been waiting for you for a long time,” one woman said.

A soldier held up his gun and said, “I’m here to kick out the Turkish mercenaries.”

Foreign ministers from all 28 European Union member states agreed unanimously on Monday to stop selling arms to Turkey, the first time the bloc reached such a decision about a NATO ally.

In a joint statement from the foreign ministers, the bloc condemned Turkey’s incursion into northeastern Syria, agreeing on strong wording despite initial concerns from Britain.

“The E.U. condemns Turkey’s military action, which seriously undermines the stability and the security of the whole region, resulting in more civilians suffering and further displacement and severely hindering access to humanitarian assistance,” the ministers said.

The legal and practical elements of such a move are complicated: Like most European Union nations, Turkey is a NATO member. European officials decided that the best way to enforce the ban was through suspending licensing for arms sales in individual European capitals, making it a national move.

This complexity was reflected in the joint statement: Citing earlier plans from France and Germany “to immediately halt arms exports licensing to Turkey,” the ministers said that “member states commit to strong national positions regarding their arms export policy to Turkey.”

The decision is expected to be most significant for Germany, a major source of weapons for Turkey. Britain, France and Italy also sell arms to Turkey.

Kurds get help from a new ally: Bashar al-Assad.

It has been only a week since President Trump pulled back American forces in Syria and effectively gave Turkey the green light to cross the border and pursue its own military agenda. Alliances are shifting, ISIS is reinvigorated and the lives of thousands of civilians are endangered.

Embittered at their abandonment by their American allies, Kurdish leaders moved to secure a new partner: the government of Bashar al-Assad, an avowed foe of the United States.

Late Sunday, the Syrian Democratic Forces, said they had struck a deal with the Assad government that would allow government forces to enter the Kurdish-controlled northeast of Syria for the first time in years. The commander of the S.D.F. wrote an article for Foreign Policy that explained the reasoning behind the deal.

The commander, Mazloum Abdi, said that in the absence of American help against the Turkish invasion, he had no option but to seek help from the Syrian Army and their Russian allies, even though “we do not trust their promises.”

“We know that we would have to make painful compromises with Moscow and Bashar al-Assad if we go down the road of working with them,” he added. “But if we have to choose between compromises and the genocide of our people, we will surely choose life for our people.”

Trump administration officials once argued that keeping Mr. Assad’s forces out of the territory was crucial to stemming Iranian and Russian influence in Syria. But with American troops on the way out, Washington has lost its leverage.

“The worst thing in military logic and comrades in the trench is betrayal,” said one official allied with the Kurdish-led Syrian Democratic Forces.

Some American military members who had worked closely with the Kurdish militia were also appalled.

“They trusted us and we broke that trust,” said one Army officer who has worked alongside the Kurds in northern Syria. “It’s a stain on the American conscience.”

Turkey has vowed to continue the offensive.

President Recep Tayyip Erdogan of Turkey said on Monday that his troops would continue to support an invasion of parts of northern Syria, despite the return of Syrian government forces.

Speaking at a news conference, Mr. Erdogan said a Turkish-backed force would press on with attempts to capture Manbij, a town at the crossroads of two major highways that the Kurdish authorities in northern Syria have handed over to the Syrian government.

The invasion of Manbij would be led on the ground by Syrian Arab militias, but would have Turkish backing, Mr. Erdogan said. The Turkish president appeared to be more ambivalent about Kobani, a Kurdish-run city on the Syrian border that Mr. Erdogan had previously threatened to capture. It was the scene of a fierce battle between Kurdish fighters and ISIS extremists in 2014 and 2015 that ended in an ISIS retreat.

Mr. Erdogan implied on Monday that an agreement about Kobani had been reached with the Russian government, Syria’s main international backer, though his meaning was unclear.

“In Kobani with Russia’s positive approach, it seems like there won’t be a problem,” Mr. Erdogan said, without elaborating.

The official Turkish explanation for the offensive was to clear the area of the Kurdish-led militia that has close ties with a terrorist group that is banned in Turkey.

At the start of the invasion, Turkish officials said they respected Syrian sovereignty.

But on Monday, Yasin Aktay, an adviser to Mr. Erdogan, said on Twitter that “the fact that Syrian Army has made a deal” with the Kurdish militia “will not stop Turkey’s antiterror operation.”

A second presidential adviser, Ibrahim Kalin, later tweeted that “Turkey will not stop until we reach our goals.” Turkish officials have previously promised to create a buffer zone along the length of its border with Syria, roughly 20 miles deep.

U.S. says Turkish strike near American post was a mistake.

Turkish troops shelled within 550 yards of an American observation post in northern Syria late Friday while United States troops were in the area, according to a military situation report obtained by The New York Times.

Since 2016, the United States has maintained several camps in northern Syria, including a post near the town of Kobani, as part of an international alliance fighting the Islamic State.

The military report undermines both American and Turkish narratives about the shelling, which was first reported on Friday by Newsweek. In American news reports over the weekend, unidentified officials variously claimed that the Turkish shelling was probably deliberate, that it was intense and that it had hit areas on both sides of the American post. In an official statement, the Pentagon said only that Turkish forces had shelled within a few hundred meters of American troops.

In response, Turkey’s Defense Ministry said that the strike was an accident and that its forces had fired on Kurdish troops around 1,000 yards from the American outpost. But the military situation report contests both the anonymous American briefings and the Turkish account.

A map shows two Turkish artillery strikes two miles west of the American outpost and one strike landing roughly 300 to 500 yards southwest of the post, closer than the Turks acknowledged, but less intense than some United States officials have claimed.

The military report said that the shelling near the American post was probably an accident, and added that further misfires by Turkish forces could not be ruled out.

Has Turkey opened the door to a reinvigorated ISIS?

The United States had no greater ally in driving out the Islamic State militants who claimed vast swathes of Syria in the quest for a modern-day caliphate than the coalition of fighters known as the Syrian Democratic Forces.

Inch by inch, the Kurdish-led militia, working with its American military partners, drove ISIS militants out of their strongholds.

But another United States ally viewed the militia much less fondly: Turkey. Its leaders looked across their southern border and saw not an ally but a threat to its territorial integrity, given the militia’s ties to Kurdish separatists in Turkey.

With Turkish-led forces now threatening the Kurds, the S.D.F. has turned its attention away from the Islamic State, including those militants captured during the war and held in detention camps. Already, some ISIS members said to have escaped, along with hundreds of their family members. A planned transfer of five dozen “high-value” detainees to the United States from Syria never happened.

Between escaped ISIS members and the Islamist sleeper cells believed to have been left behind when the militants were defeated in Syria, there is concern that the world has not seen the last of the extremist group. 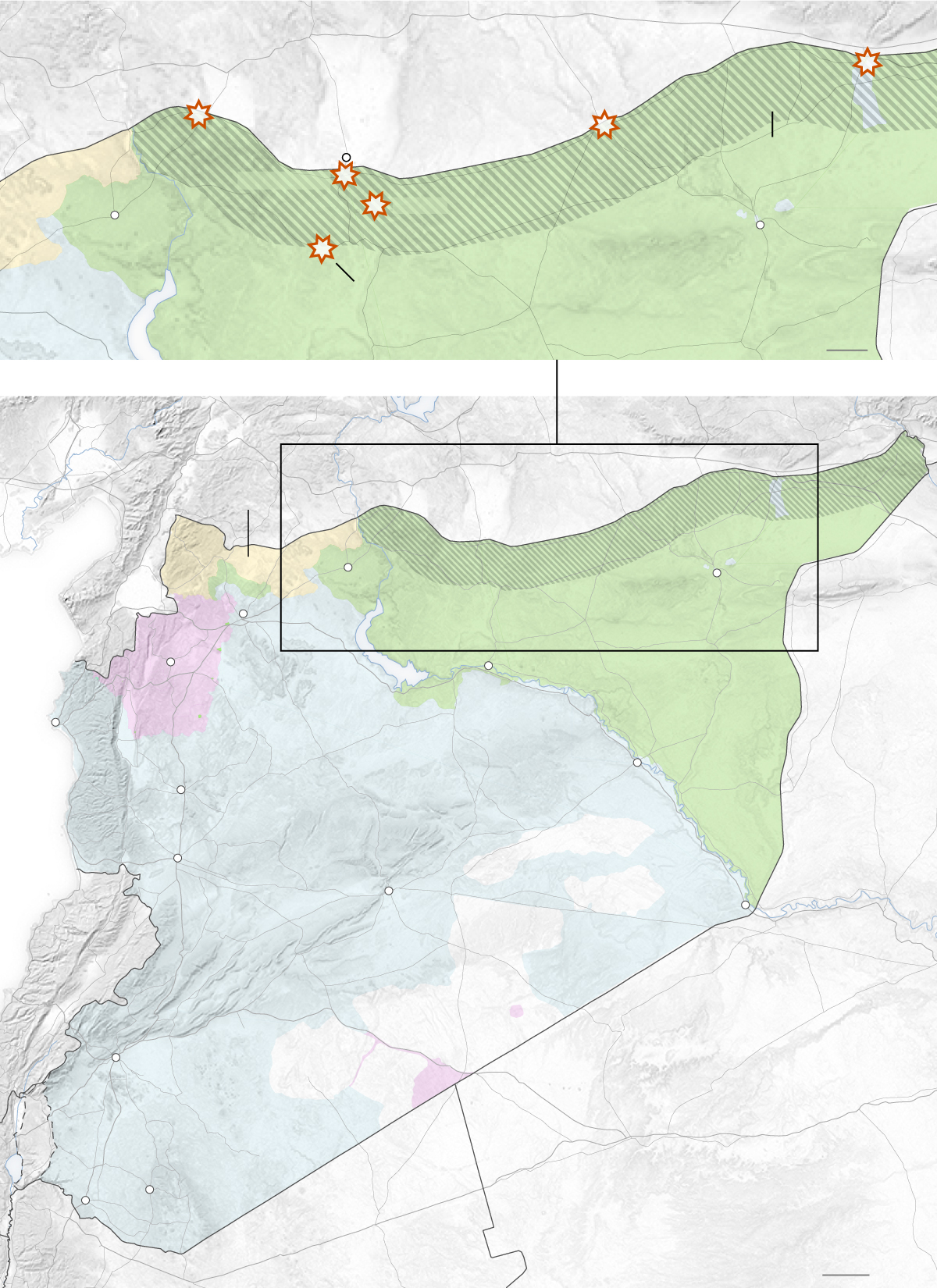 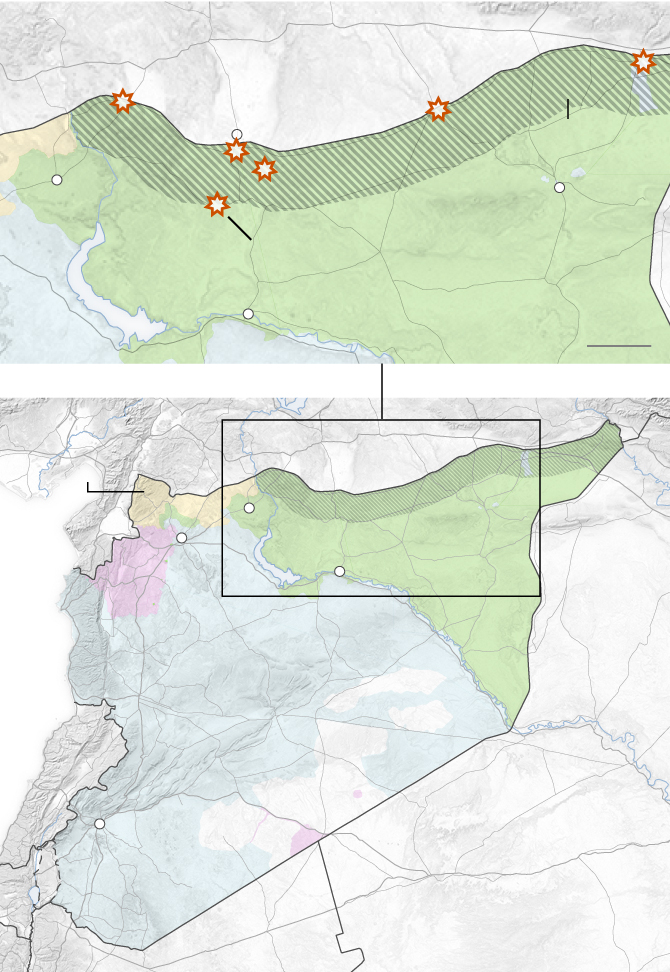 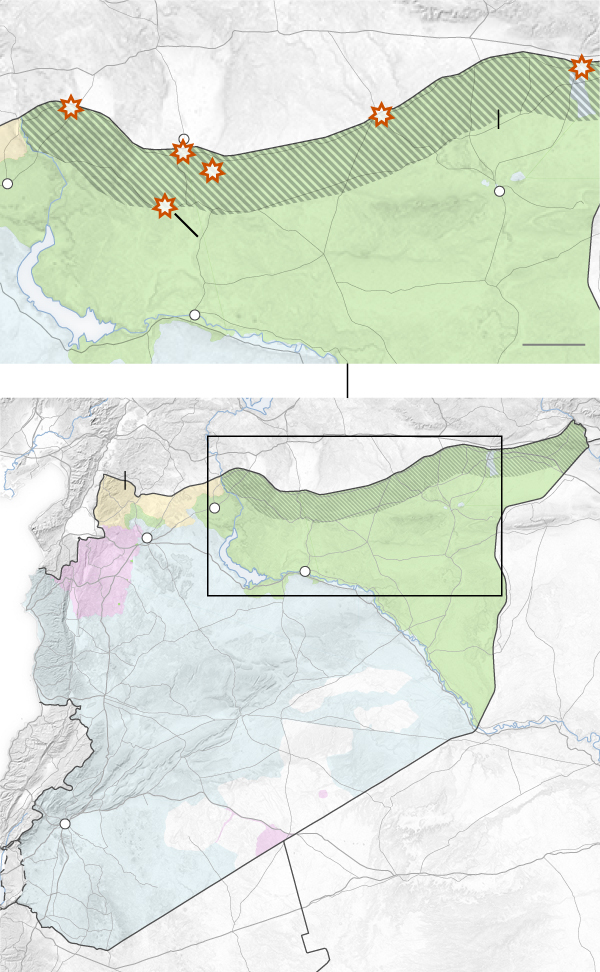