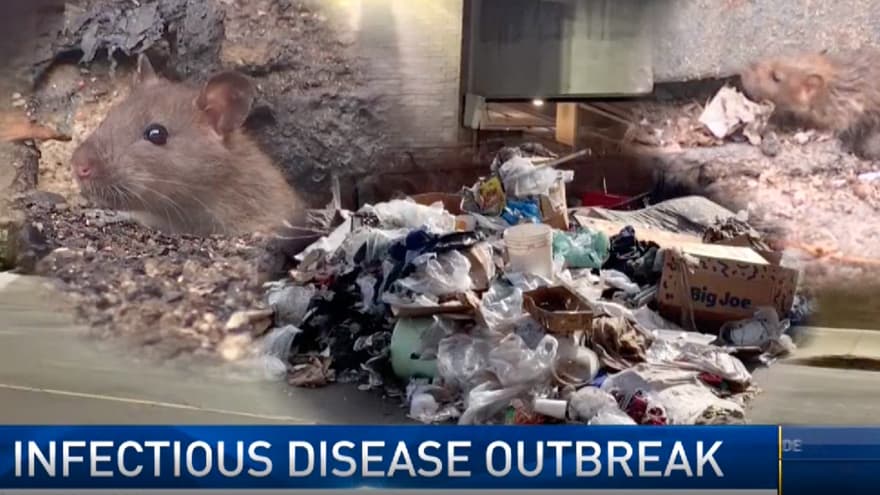 Multiple officers serving with the Los Angeles Police Department were diagnosed this week with Typhus and other diseases related to the city’s exploding rat population.

“An officer at the Los Angeles Police Department’s Central Station has contracted Salmonella Typhi, the bacteria that causes typhoid fever, and another is suspected of contracting typhus, a disease carried by rats and fleas, the LAPD told the I-Team Wednesday,” reports NBC Los Angeles.

“Typhoid fever is a life-threatening illness, according to the Center for Disease Control and Prevention. Typhoid fever is rare in industrialized countries like the United States, per the CDC,” adds the article.

Los Angeles continued its ongoing struggle with rampant homelessness and crumbling infrastructure weeks ago, with residents complaining of “rotting trash piles” that are attacking rats and posing a major risk to the health of residents and tourists.

“Rat-infested piles of rotting garbage left uncollected by the city of Los Angeles, even after promises to clean it up, are fueling concerns about a new epidemic after last year’s record number of flea-borne typhus cases,” reports NBC Los Angeles.

“Even the city’s most notorious trash pile, located between downtown LA’s busy Fashion and Produce districts, continues to be a magnet for rats after it was cleaned up months ago. The rodents can carry typhus-infected fleas, which can spread the disease to humans through bacteria rubbed into the eyes or cuts and scrapes on the skin, resulting in severe flu-like symptoms,” adds the article.

“I can’t walk down the street without thinking that a flea could jump on me,” complained a local business owner.

“It’s something that we’ll look into,” said Pepe Garica, of Los Angeles’ bureau of sanitation.

The nation’s second largest city is also home to some of the country’s worst traffic conditions.