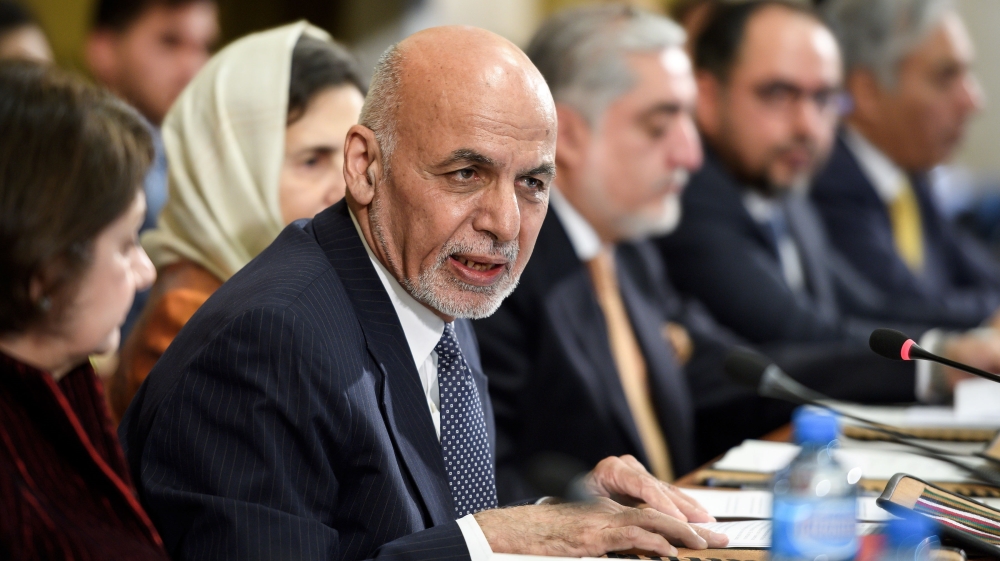 Afghan President Ashraf Ghani has made a renewed call for peace after his US counterpart Donald Trump abruptly called off talks with the Taliban as the group pledged to continue its fight against “foreign occupation”.

President Ghani’s move on Monday was a notable shift in the stance of the Afghan government, which, before Trump’s decision, had said it had no conditions for entering talks with the Taliban.

“We are ready for peace talks but if the Taliban think they can scare us, look at these warriors,” Ghani said, declaring that peace could not be unconditional as he repeated demands for a ceasefire that the Taliban have so far refused.

Ghani went as far to invite Taliban chief Maulvi Hibatullah Akhunzada to a video conference and urged him to “at least talk with people” instead of hiding.

The Taliban has repeatedly dismissed Ghani’s government as a puppet of the United States with no real power.

It was not immediately clear whether the US-Taliban talks would resume on ending nearly 18 years of fighting.

A draft accord agreed last week would have seen some 5,000 US troops withdrawn over coming months in exchange for guarantees that Afghanistan would not be used as a base for armed attacks on the US or its allies.

In an exclusive interview with Al Jazeera, Taliban spokesman Suhail Shaheen said the group would end its attacks if the US ends its military campaign and signs an agreement.

“If we sign an agreement with them, we have an obligation not to attack them, and to provide them a safe passage,” Shaheen said.

However, Shaheen added if they withdraw without an agreement, the attacks would potentially continue depending if they served the “national” and “Islamic” interest.

The end of the talks has caused fears of a further increase in violence across Afghanistan, with heightened security warnings in the capital Kabul and other centres ahead of a presidential election scheduled for September 28.

Kabul’s streets were largely empty on Monday, as armed supporters of Massoud, who was killed two days before the 9/11 attacks, waved flags from circling vehicles, and at times firing into the air in a show of power – despite a government warning that they could be arrested.

One police officer was killed, officials said, as the demonstration turned violent. Security forces began to block certain streets and carry out searches.

Also on Monday, a roadside bomb in Kabul wounded three civilians, according to a spokesman for the city’s police chief. The target was unknown, he said, and there was no immediate claim of responsibility for the attack.

The Taliban claimed attacks in at least two districts of the northeastern Takhar province overnight, with no immediate reports of casualties. A heavy gun battle continued in the district of Khwaja Ghar, said Khalil Aser, the spokesman for the provincial police chief.

In the northern Sari Pul province, at least five women were wounded in an air attack by the Afghan air force late on Sunday, said Mohammad Ayub Ansari, the Gospandi district chief.

The air support was called in after the Taliban shot and killed two pro-government fighters, leading to a gun battle with security forces, Ansari said. An unknown number of Taliban fighters were killed and wounded, he said.

The Taliban has not commented on that attack.