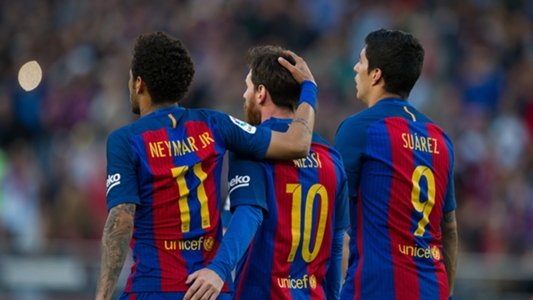 Led by their formidable ‘MSN’ strikeforce, Barca dazzled in Luis Enrique’s first campaign in charge. Having already wrapped up a domestic double, Rakitic scored the opener in a 3-1 Champions League final win over Juventus in Berlin.

Suarez and Neymar, now at Paris Saint-Germain, also scored that day, and their partnership with the talismanic Messi was one the Croatia international relished playing with.

“It was very enjoyable,” Rakitic said to Marca about playing with ‘MSN’ five years to the day of that European final success.

“You could see the opposition’s concern, because they had to fully focus and didn’t know where to concentrate most.

“We attacked at every possible chance, we were dangerous and deep and had everything. It was a joy to play with them.

“We were very strong and got stronger with time. We reached the final at our peak and I remember how we felt.

“We said that we didn’t want the season to end because we wanted to keep playing. There was a strong sense of superiority that kept us wanting to play.

“[The key was] how the players mixed together and how hungry the new players were. All of that was coupled with a great coach who knew the finer details and how to handle everything.

“It was an impressive season and I still remember it all today: what happened before the final, the game, the goal, the post-match – it was unforgettable. That final will always be engraved in my mind.”

Barca, two points clear of rivals Real Madrid, are poised to resume their La Liga campaign away to Real Mallorca on June 13.

While the 2019-20 season will have an unusual feel once it restarts due to the impact of the coronavirus crisis, Rakitic hopes it can prove to be a successful one for the club.

“It will be different for everyone,” he said. “There’s a clear before and after with the virus.

“We have come through a hard time, everyone worked at home and now the games will be behind closed doors, so everything will be different.”

Asked if Barca could win the Champions League for the first time since that 2015 success, Rakitic added: “We want to improve a lot of things because we know that we need to.

“There’s a fantastic atmosphere in the dressing room and we have clear objectives.

“Hopefully we’ll end August with both trophies [La Liga and the Champions League], we are working for that and I think it is possible.

“We want it. We will have to be prepared and see how the competition is formatted, but we have an opportunity that we want to take advantage of.”