Macy’s profit fell 48% during its spring quarter compared with the same period a year ago, the company said in earnings on Wednesday. Macy’s lowered its profit expectations for the remainder of the year.
Investors quickly sold off Macy’s (M) stock, driving it down as much as 16% during early trading. Heading into Wednesday, shares of Macy’s had fallen 34% this year.
During the spring, Macy’s said it had a “fashion miss” in its key private-label athletic brand and struggled to sell warm weather gear. International tourism to its stores also slowed down, as the global economy slows, according to the company. That left Macy’s with too many clothes on the shelves, forcing the company to put them on sale to clear out inventory for the fall. Discounts pinched Macy’s quarterly profit.
“We had a slow start to the quarter and finished below our expectations,” Macy’s CEO Jeff Gennette said in prepared comments. “We took markdowns to clear the excess spring inventory.” 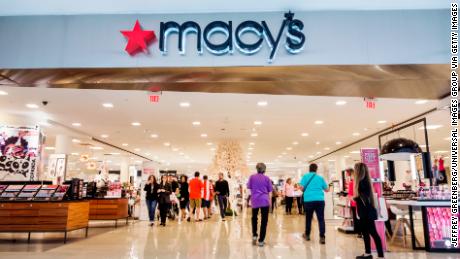 Macy’s weak quarter signaled broader woes for department stores. Sales at department stores dropped 4.3% over the past six months compared with a year prior, the Commerce Department said in July. Kohl’s (KSS), Nordstrom (JWN) and JCPenney (JCP) dropped sharply Wednesday. They report earnings in the coming weeks.
Amazon (AMZN), big box retailers such as Target (TGT) and Walmart (WMT) and new clothing and home brands that got their starts online have squeezed traditional department stores. Discount stores such as TJMaxx are also expanding rapidly, drawing customers away from Macy’s and others with low prices on a constantly-changing array of clothes. Macy’s has tried to combat the rise off discount chains by opening Macy’s Backstage, its own lower-priced arm, within some stores.
Tariffs on goods from China are another concern for Macy’s and other retailers.
President Donald Trump said earlier this month that he would add a 10% tariff on an additional $300 billion of Chinese-made products on September 1. However, on Tuesday, the top US trade negotiator said that new 10% tariffs on Chinese-made consumer goods including cell phones, toys and video game consoles would be delayed until December 15.
Trump said the move was designed in part to avoid any pain for consumers heading into the holiday season.
Macy’s has been working to move its private label product manufacturing out of China in recent years. But consumers will likely see prices go up at Macy’s and other retailers if tariffs are placed on all Chinese goods.
“It is hard to do the math to find a path that gets you to a place where you don’t have a customer impact,” Gennette said earlier this year.
Macy’s still has close to 700 US stores and has searched for new ways to draw customers on its website, mobile app and through buy online, pickup in store. Macy’s said Wednesday that mobile sales are its fastest-growing channel.
The company insisted it’s on the right track and has a plan to draw shoppers and reshape its business.
“Our team has responded quickly to the external environment, course corrected when needed and we remain confident,” Gennette said.