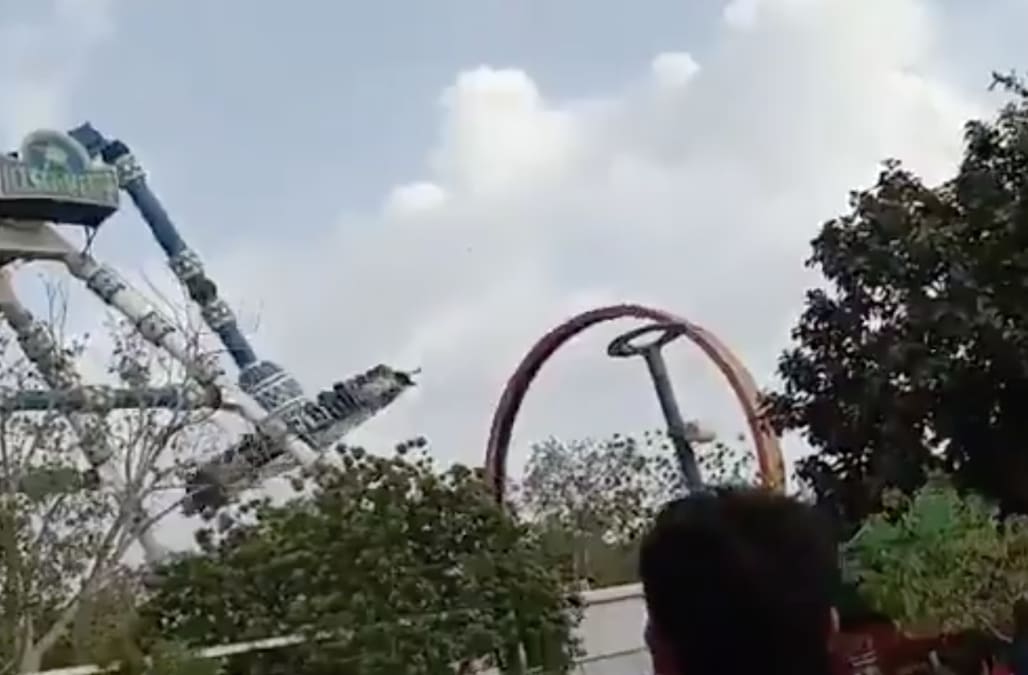 At least two people were killed and 27 were injured after a ride at an Indian amusement park unexpectedly plummeted on Sunday, the Hindustan Times reports.

The incident, which took place in Ahmedabad’s Kankaria Lake area, occurred after the pipe of the main shaft of a pendulum-swinging ride called “Discovery” broke, Ahmedabad Municipal Corporation chief fire officer M.F. Dastoor told the newspaper. Thirty-one people were reportedly on board when the ride abruptly crashed to the ground.

“How that pipe broke is a matter of investigation by Forensic Science Laboratory,” Dastoor said.

At the beginning of a 45-second clip, which has since gone viral on Twitter, the ride seems to swing back and forth normally. Things, however, take a turn for the worse at the video’s 29-second mark: As the ride swings right, the steel pipe holding the thrill-seekers snaps, and the riders on board crash against the structure’s base.

“Twenty-nine people were brought to the hospital, out of whom two died, while 27 are being treated,” said Ahmedabad mayor Bijal Patel.

Although officials confirmed that the attraction’s main shaft had malfunctioned, they said they were unsure if the crash was also the result of the welded section at the ride’s top giving way or if the ride’s nuts and bolts had already been loose.

“An inquiry will be conducted to ascertain as to what went wrong, and steps against those responsible for the fault will be taken soon,” Patel said.

The crash came just weeks following a similar occurrence in India, in which a free-fall ride at a different park broke down and injured 12 people. Last month, the Queensland Amusement Park in Chennai was ordered to suspend operations “indefinitely” after the free-fall attraction’s cables snapped and dropped a group of riders 10 feet to the ground, according to Fox News.

Video of that incident shows two groups of thrill-seekers being lifted into the air before they drop. Toward the end of the ride, one group is lowered down slowly while the other one falls at full speed — without notice — after the steel cables holding the passengers breaks.

Officials told the News Minute that, in Queensland’s case, they had previously warned the park about its equipment.

“We wrote to them in April to ensure that all the rides were in good shape,” assistant commissioner Muthuvel Pandi said. “They claimed that they had checked everything, but clearly that was not the case.”