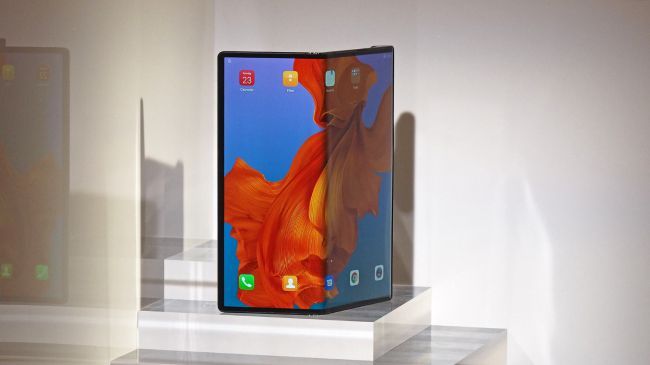 Huawei has listed the Mate X in TENAA — the Chinese telecommunications equipment certification authority — complete with its full specs. Such listings are usually indicative of an imminent launch.

The other screen is a smaller 6.38-inch 2,480 x 892-pixel screen area because that blade also has a black bar that holds the camera module, which has a 40-megapixel sensor with f/1.8 lens, a f/2.4 telephoto lens with 8-megapixel sensor, and an ultra wide f/2.2 aperture lens with a 16-megapixel sensor.

The camera package also has a Time-of-Flight laser sensor that capture volumetric scene information for depth of field effects and augmented reality applications. The black bar also has a fingerprint reader.

The TENAA listing also reveals a 2.6-GHz Kirin 980 octa-core CPU at the heart of this beast, which will come with three memory and storage variations: 6, 8, and 12 gigabytes of RAM and 128, 256, and 512 gigabytes of storage. The storage is expandable to an extra 256GB, thanks to Huawei’s proprietary digital storage NM card.

The official price is not on the site, but we previously reported that the Mate X will cost an eye-watering €2,299 (around $2,602 based on currency conversions) for an 8GB RAM/512GB storage variant. To put that in context, Samsung’s Galaxy Fold has a starting price of $1,980.

Huawei delayed the June launch of the Mate X after the Samsung Galaxy Fold imploded and the Korean company delayed its release. Samsung latelr said that the Fold’s problems have been solved and the phone’s re-launch is coming soon.

There is no final release date for the Mate X yet.