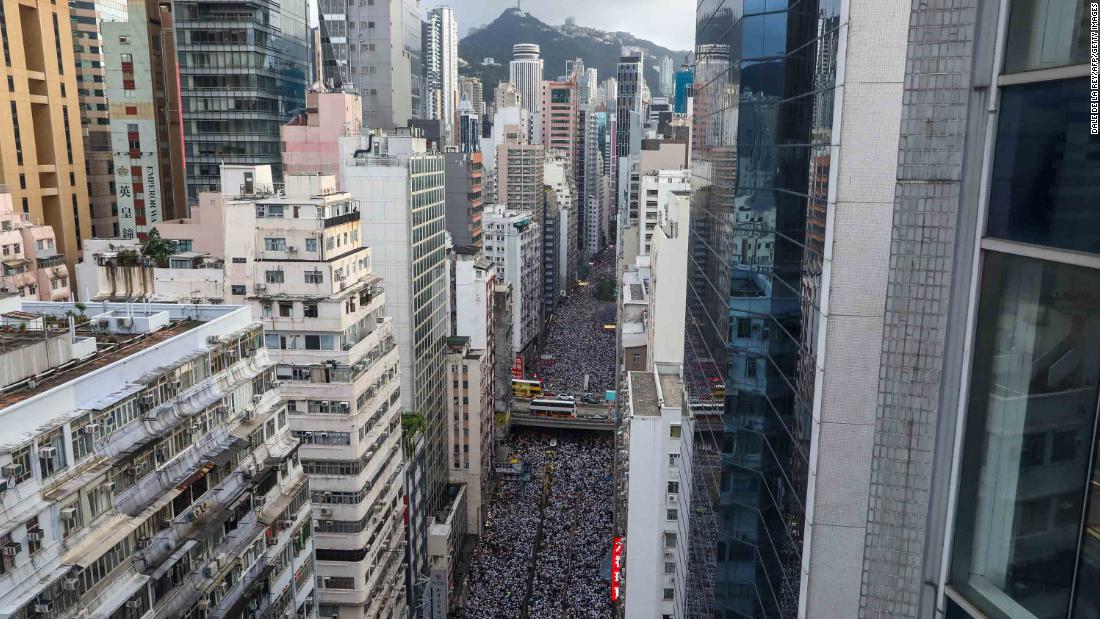 The discovery comes on the eve of a series of high-profile protests planned over the weekend, amid high tensions in the semi-autonomous Chinese city over a now-suspended extradition bill.
At a press conference Saturday, police confirmed the arrest of 27-year-old man in connection with the raid, at what police have described as a homemade laboratory in the industrial area of Tsuen Wan.
Police uncovered 2 kilograms (4.4 pounds) of high explosives, 10 petrol bombs, corrosive liquids, weapons and metal poles at the property.
“It’s the largest such seizure we have ever come across in Hong Kong,” said Alick Mcwhirter, superintendent of the Explosive Ordinance Disposal (EOD) Bureau. Leaflets linked to anti-extradition bill protests were also found on site.
Police said they were still testing the raw materials, but believe Triacetone triperoxide (TATP) was found at different manufacturing stages at the suspected laboratory. EOD officers carried out a controlled explosion Saturday morning and were expected to perform more throughout the day.
A powerful high explosive, TATP was used in the November 2015 Paris attacks, the March 2016 Brussels bombings, the 2017 May Manchester bombing and a failed bomb attempt by an Islamist extremist at the Gare Centrale in Brussels in 2017.
TATP is made by adding an acid to a mixture of acetone and hydrogen peroxide solution and can easily result in accidental detonation if mistakes are made in preparation.
Superintendent Steve Li Kwai-wah, of the Organized Crime and Triad Bureau, said the man arrested was wearing a shirt with the logo of the banned pro-independence group Hong Kong National Front.
Protests calling for government reforms and democracy have become a familiar sight in Hong Kong over the past six weeks, as hundreds of thousands of people have taken to the streets.
The demonstrations were sparked by strong public opposition to a bill that would have allowed people in Hong Kong to be extradited to face trial in mainland China. Though the bill has since been suspended, protests have continued and on multiple occasions descended into violence.
Rallies are taking place across Hong Kong on Saturday and Sunday, with both pro-government and anti-extradition bill marches scheduled.
Li did not say if extra police would be arranged for protests this weekend as a result of the raid.