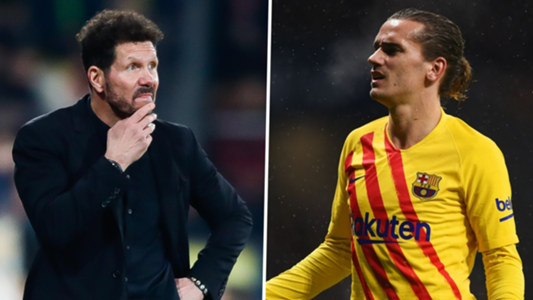 Griezmann was a 90th-minute substitute against former team Atletico, who earned a 2-2 draw away to stuttering Barca in La Liga on Tuesday.

A €120 million signing from Atletico at the start of the season, Griezmann arrived amid much hype but the star forward has struggled at Camp Nou, where he has started on the bench against Sevilla and Athletic Club in recent weeks.

Griezmann has scored eight La Liga goals this season and 14 across all competitions for second-placed Barca, who could fall four points adrift of bitter rivals Real Madrid on Thursday.

However, Griezmann has not scored since Barca’s 1-1 draw against Napoli in the first leg of their Champions League last-16 tie prior to the coronavirus pandemic in February.

Lionel Messi converted a penalty of his own five minutes into the second half to celebrate his 700th career goal, but another Saul spot-kick – in the 62nd minute – secured a draw for Atletico.

It is the first time Atletico have scored two goals against Barca in La Liga under Simeone, whose side are third and two points clear of Sevilla with five matches remaining.

“We are respectful of Barcelona ​​with the quality they have,” Simeone said.

“The game was played as a result of what we usually do. We started well. Their goal came in an isolated play. Then to generate a difficult game against a team that keep the ball well.

“We tried until the end. The work was very good, a very competitive team. I’m happy.”

Setien admitted he felt bad for Griezmann after the match but revealed he wary of introducing the Frenchman as he can ‘destablise’ his team.

“I understand it’s tough for Griezmann to come on when so little time left. I will speak with him tomorrow, I won’t say sorry because [it’s about] decisions,” Setien said.

“But I understand he may feel bad and I feel bad for him because he’s a great person and professional.

“It’s difficult to put him on without destabilising the team.”