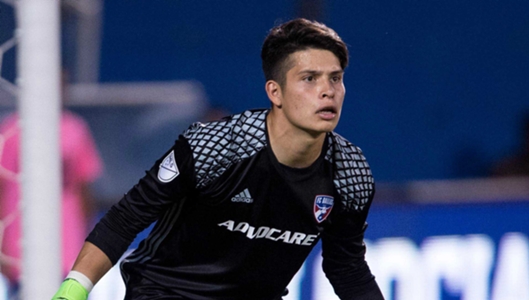 The league is conducting an investigation into the accusations after a report was recently made to the Frisco Police Department.

While those investigations are ongoing, Gonzalez will undergo an assessment by doctors and will be ineligible to join FC Dallas for any team activities.

“FC Dallas goalkeeper Jesse Gonzalez has been suspended by Major League Soccer following a report made to the Frisco Police Department alleging incidents of domestic abuse,” the league said in a statement.

“MLS is conducting an independent investigation into the matter and will remain in close communication with FC Dallas, local law enforcement, and the MLS Players Association throughout the process.

“The player proactively submitted to, and is currently undergoing, an assessment by Substance Abuse and Behavioral Health (SABH) doctors. Gonzalez will not be eligible to participate in any team activity until the assessment is complete, he is cleared for participation by the SABH Program doctors, and Major League Soccer completes its investigation.

“MLS will not have further comment on this matter until the conclusion of the League’s investigation.”

FC Dallas released a statement of their own, with the club stating that it will cooperatively work alongside MLS as the process plays out.

“FC Dallas takes these matters extremely seriously and fully supports the league’s swift action to suspend the player while an investigation takes place. We continue to work closely with Major League Soccer regarding this.

“As this is an ongoing investigation, FC Dallas will not have further comment at this time.”

Gonzalez has been with FC Dallas since 2011, having signed his first professional deal as a homegrown player in 2015.

The 25-year-old goalkeeper has been a fixture in net since becoming the full-time starter in 2017, having started a total of 101 regular season matches during his career.

Gonzalez, who started 32 matches last season, was in goal for each of FC Dallas’ two matches prior to the league’s shutdown due to the coronavirus.

MLS recently approved a plan to allow teams to return to full training with one eye on an upcoming tournament to be held in Orlando.