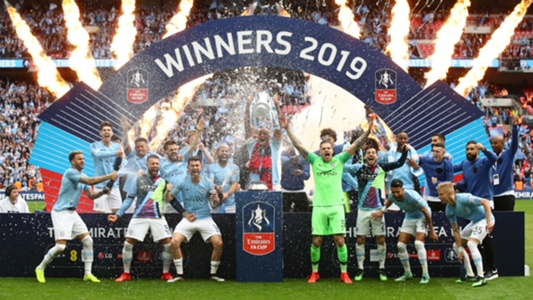 The Football Association has announced a provisional schedule for the remaining rounds of the 2019-20 FA Cup, with the final hoped to be played on August 1.

It was announced on Thursday that the English Premier League season will restart on June 17, with the first full set of weekend fixtures marked in for June 19 to 21, pending government approval.

The FA Cup is also set to resume, with the quarter-finals arranged for June 27 and 28 and the semi-finals on July 11 and 12.

The quarter-final matches were drawn on March 9, although the games were unable to take place because of the coronavirus pandemic which caused a worldwide shutdown of competitive football.

Holders Manchester City have been drawn away to Newcastle United in one of four all-Premier League ties. Leicester City will host Chelsea, Sheffield United play Arsenal and Manchester United will travel to Norwich City.

Mark Bullingham, CEO of the FA, said: “The competition has been an integral part of the English football calendar for nearly 150 years, and we’d like to thank the Premier League executive and clubs for their support in scheduling the remaining matches during this unprecedented time.

“This has been a difficult period for many people and, while this is a positive step, the restart date is dependent on all safety measures being met. The health and wellbeing of players, staff and supporters remains our priority.”

The Premier League season will resume on June 17 with Manchester City’s meeting with Arsenal one of the first matches to be played – and all 92 remaining matches will be broadcast live.

Aston Villa‘s home clash with Sheffield United is another that will mark the return of the English top flight, with both those matches the two games in hand that were left unplayed prior to the coronavirus pandemic halting football.

The agreement to resume came after Premier League clubs met on Thursday to continue discussions over ‘Project Restart’. All matches will be played behind closed doors.

It was also confirmed all the remaining games of the season will be shown in the UK on the television channels currently with rights to broadcast the league – Sky Sports, BT Sport, BBC and Amazon Prime.

The full list of kick-off times were also revealed, with weekend games to be played at 10 different time slots from Friday to Monday, as well as Tuesday, Wednesday and Thursday evenings – giving fans the prospect of football every night of the week until the end of the season.

The decision was made to temporarily suspend the season back on March 13 after both Arsenal head coach Mikel Arteta and Chelsea winger Callum Hudson-Odoi had tested positive for Covid-19.