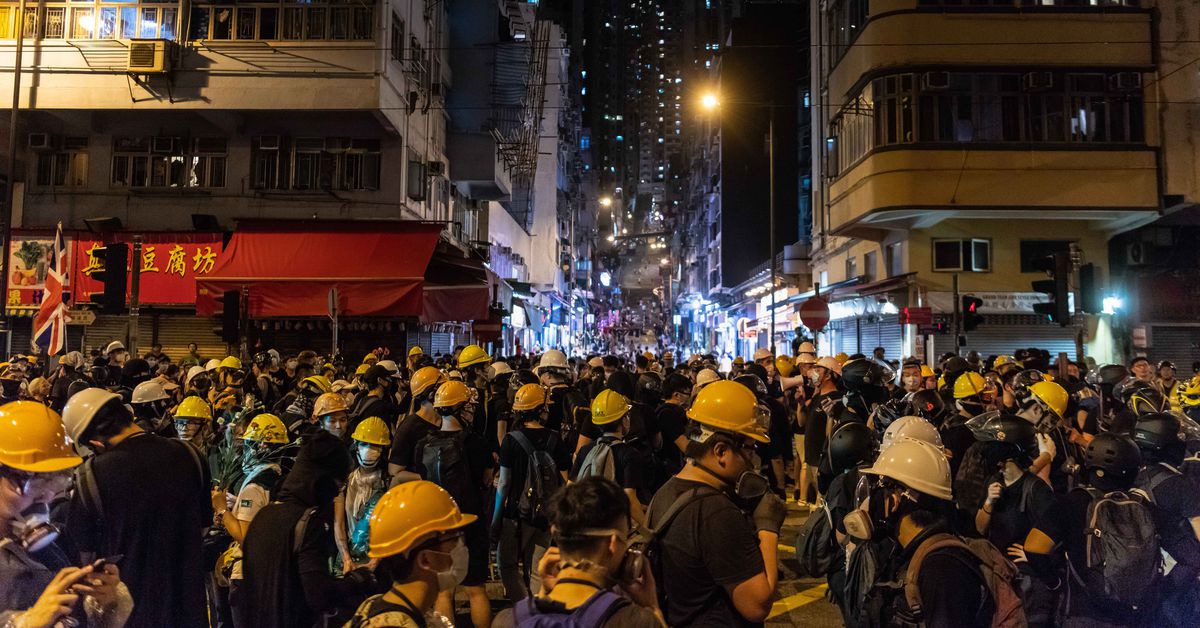 A violent mob of people in white shirts attacked protesters in a train station in Yuen Long, Hong Kong, on Sunday night, intensifying the standoff between Hong Kong’s government and police force and pro-democracy protesters.

About 45 people were injured — including at least one critically — when a mob of mostly masked men in white t-shirts ambushed black-clad protesters and innocent bystanders in the train station, hitting them with bamboo sticks, wooden rods, and other objects.

The pro-democracy activists were on their way home from a rally in central Hong Kong in which police fired tear gas at demonstrators and accused them of throwing bricks and other projectiles.

It’s unclear who exactly the train station attackers were, but many suspect them of having ties to Hong Kong’s powerful triads: organized criminal gangs often referred to as the “Chinese mafia.” There is also speculation among activists the attackers were at the very least encouraged by the Chinese central government in Beijing, which backs Carrie Lam’s government and has been trying to quell these protests for weeks.

The lackluster police response to emergency calls from victims during the mob attack is adding to the perception that the Hong Kong government and its Chinese backers sanctioned the assault as a way to send a strong message to demonstrators.

But if the attack was intended to convince protesters to shut their mouths and go home, it seems to have done just the opposite.

Democratic lawmaker Lam Cheuk-ting, who was hurt during the mob attack, told Reuters that the police ignored his pleas to intervene. “They deliberately turned a blind eye to these attacks by triads on regular citizens,” he told Reuters. “I won’t speculate on why they didn’t help immediately.”

Other pro-democracy lawmakers were more direct, with a group of activists calling the police “servants of the triads.”

“Last night, the 999 reporting hotline would not connect for a long time and the police station was closed,” about two dozen pro-democracy lawmakers said in a statement, according to the Hong Kong Free Press. “There were even police officers who pretended they didn’t see the actions of those in white shirts and red ribbons, and turned around to leave.”

Triads have been accused of political intimidation in the past, including during the 2014 Umbrella Movement protests in Hong Kong. According to the BBC, researchers found that triad members had been paid to attack demonstrators during that movement:

Triads “might have found a new role as enforcer of unpopular policies and repression of democratic protests in the context of a drift towards authoritarianism in Hong Kong”, the report concludes.

One of the researchers, Federico Varese, a professor of criminology at the University of Oxford, told the BBC that Sunday’s attacks in the train station looked like a “carbon copy” of 2014.

The police have resisted criticism they were slow to act. Hong Kong police chief Stephen Lo said his force was stretched dealing with anti-government protests in the rest of the city. He also called any insinuation that the police were somehow involved or complicit in the mob violence a “smear.”

Carrie Lam, Hong Kong’s embattled chief executive, condemned the attacks in the train station — as well as the actions of a small group of pro-democray demonstrators who earlier in the day had defaced and graffitied the emblem outside of a liaison office for the Chinese central government — saying “violence will only breed more violence.” She called the defacing of the Chinese liaison office a “challenge” to national sovereignty.

Pro-democracy lawmakers called for an independent inquiry into the police response, but there’s a question whether the mob violence will have a chilling effect on the protests against Hong Kong’s leadership and this extradition bill.

On Monday, reports from the streets of the Yuen Long said it looked like “a ghost town” in the wake of the mob attack. But protests over the handling of the incident are already being scheduled for this weekend, on July 27.

And the source of this growing unrest — a controversial extradition bill that would allow people arrested in Hong Kong to be extradited to mainland China — also isn’t going away anytime soon.

Many pro-democracy critics see the bill as yet another example of Beijing trying to increase its control over Hong Kong, which though technically part of mainland China is supposed to be self-governing.

Lam has said the bill is “dead” but has refused to formally rescind it. Critics say her refusal to do so means she is biding her time and could reintroduce it at any moment.

China’s reaction to the latest unrest in Hong Kong is also telling. The Chinese government has said the defacement of the liaison office “openly challenged the authority of the central government.”

The Wall Street Journal reports that the state-run media — which has largely ignored the protests — did a flurry of coverage on the “radical” anti-government protests in an apparent attempt to stoke public anger.

“Pro-Beijing opinions were allowed to proliferate on Chinese social media, as censors appeared to tolerate the sharing of footage and images of the unrest in Hong Kong — as long as they kept to the official narrative on the protests,” the Wall Street Journal’s Chun Han Wong and Eva Dou reported.

Beijing, then, seems to be upping its offensive as the protests have dragged on for weeks. A Chinese military unit conducted an anti-terrorism exercise not far from Hong Kong, a move some interpreted as a sign that China’s military could become more directly involved.

On Monday, answering questions from reporters, Trump said that Beijing has behaved “very responsibly.” “I hope that President Xi will do the right thing,” the president added. “But it has been going on a long time.”