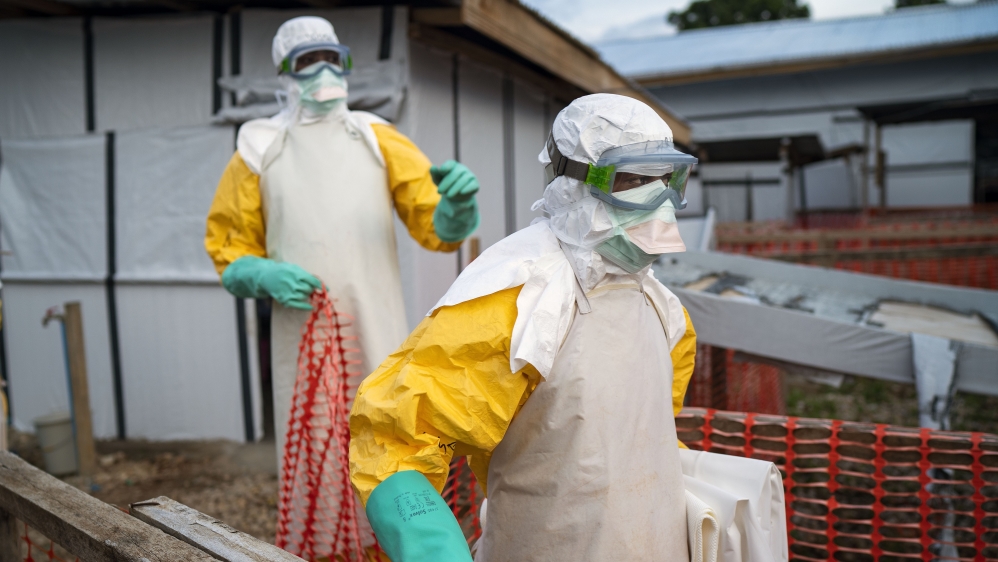 A top African Union (AU) health official has warned against curbing travel to the Democratic Republic of the Congo amid heightened concerns the country’s Ebola outbreak could spread more widely in the region.

According to DRC’s health ministry, the current Ebola outbreak has killed more than 1,700 people – more than two-thirds of those who contracted it – since it emerged in the country’s eastern North Kivu and Ituri provinces last August.

“We want to be sure that the international community and member states in Africa do not impose any restrictions on travels to anyone going into or coming outside of the DRC,” John Nkengasong, director of the AU’s Africa Centres for Disease Control and Prevention (CDC), said on Friday.

Doing so would “impede our ability to effectively control the virus”, Nkengasong told reporters at the AU headquarters in Ethiopia’s capital, Addis Ababa.

On Wednesday, the World Health Organization (WHO) declared the epidemic a public health emergency of international concern (PHEIC), just days after the virus spread to a major urban hub for the first time and raised the spectre of a rapid increase in transmission rates.

A PHEIC is a rare designation used only for the gravest epidemics and had only been applied four times in the past.

Making such a declaration typically boosts global attention and can spur an increase in international aid.

The WHO said the move recognised the “possible increased national and regional risks and the need for intensified and coordinated action to manage them”, but also said no country should close its borders or place any restrictions on travel or trade because of Ebola.

Any closure of borders with the DRC could make it more difficult to move people and medical supplies in or out of the affected area, potentially hindering response teams’ efforts to end the epidemic.

“Essentially for the rest of the world, the main recommendation is: support DRC and don’t panic,” WHO spokeswoman Margaret Harris said on Friday. “Do not shut borders. Do not put on travel and trade restrictions. Do not panic.”

On Sunday, the DRC’s health ministry registered the first case of Ebola in Goma, a city of some two million people in North Kivu and near the border with Rwanda.

Goma has a port that links to the city of Bukavu in neighbouring South Kivu province, as well as an airport with flights to the capital Kinshasa, Uganda’s Entebbe and Addis Ababa.

Outside of the case in Goma, and three fatal cases in Uganda last month, the outbreak has been confined to other largely rural regions of North Kivu and Ituri.

The WHO said on Thursday there were currently no cases outside of DRC, with hand washing and fever checks being enforced by police on the country’s border with Rwanda.

But efforts to end the epidemic have been repeatedly hampered by a “perfect storm” of regional insecurity in eastern DRC and deep community mistrust over the crisis and towards authorities.

Amid the unrest, health workers have vaccinated some 160,000 people. The vaccine is experimental but is estimated to be 97.5 percent effective and, according to the WHO, may protect a person for up to 12 months.